Beijing-Moore Threads 2022 Autumn Conference was held successfully on November 3, 2022 in Beijing Zhongguancun National Independent Innovation Demonstration Zone. Moore Threads announced a number of innovative achievements at the press conference, including the new multi-functional GPU product and MUSA software stack based on “Spring Dawn,” demonstrating the comprehensive strength of Moore Thread’s “combination of software and hardware.” Among them, MTT S80, the industry’s first Guochao graphics card specifically designed for gamers, has garnered a lot of attention and enthusiasm from the scene. Moore Threads announced on the spot that the MTT S80 graphics card has finished the first batch of production and stocking, and that limited sales will begin on the JD e-commerce platform on November 11, 2022. 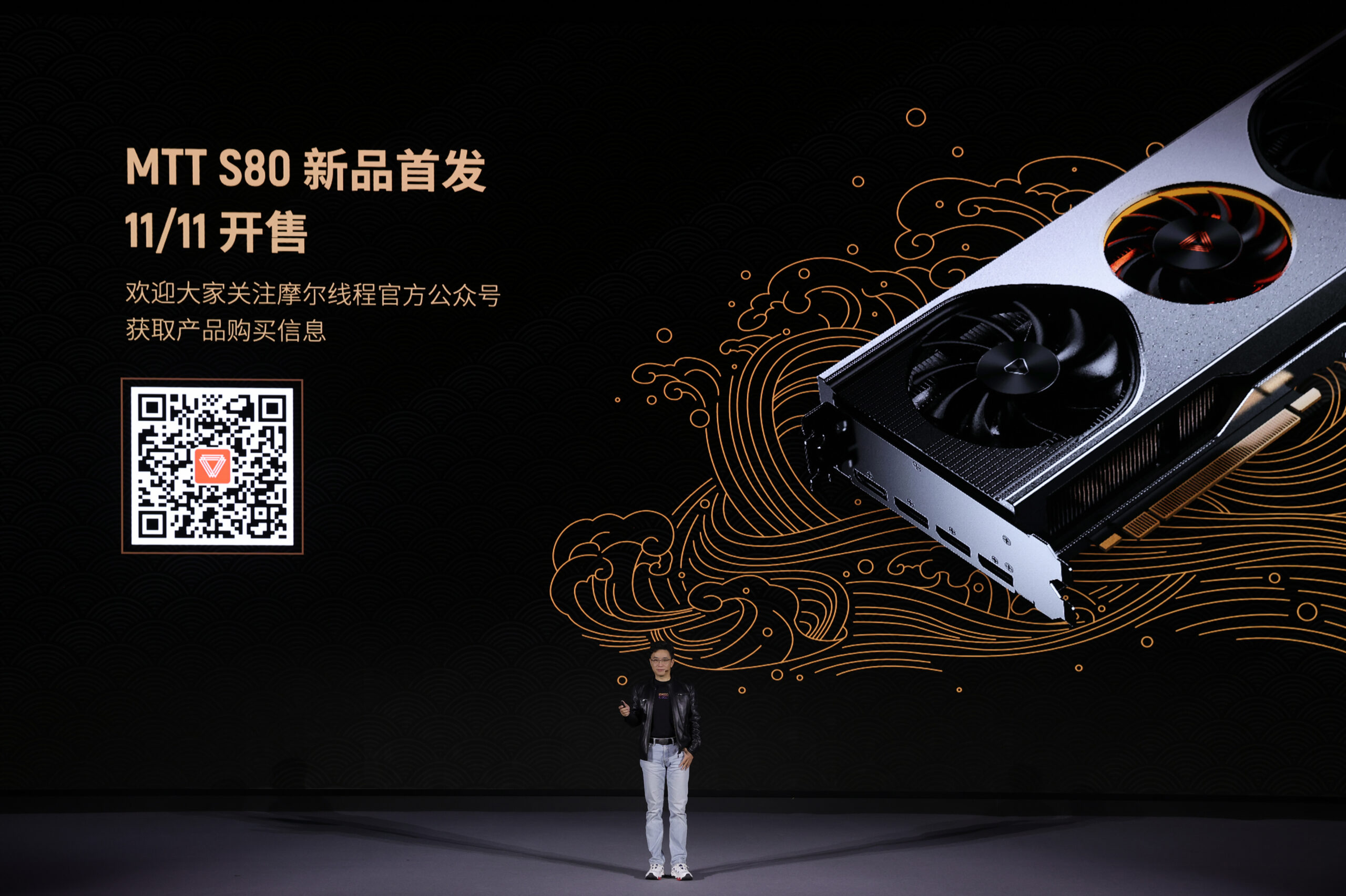 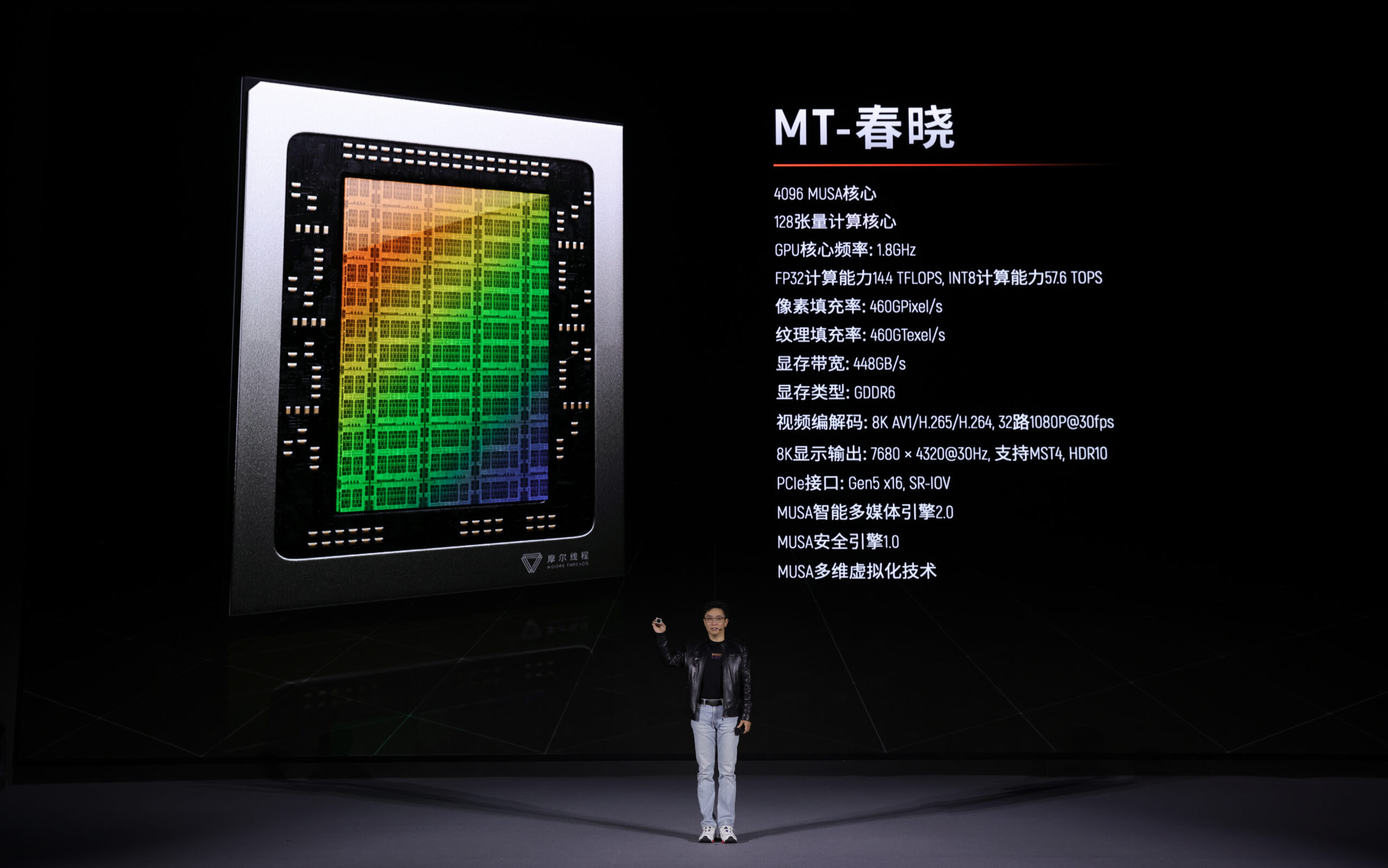 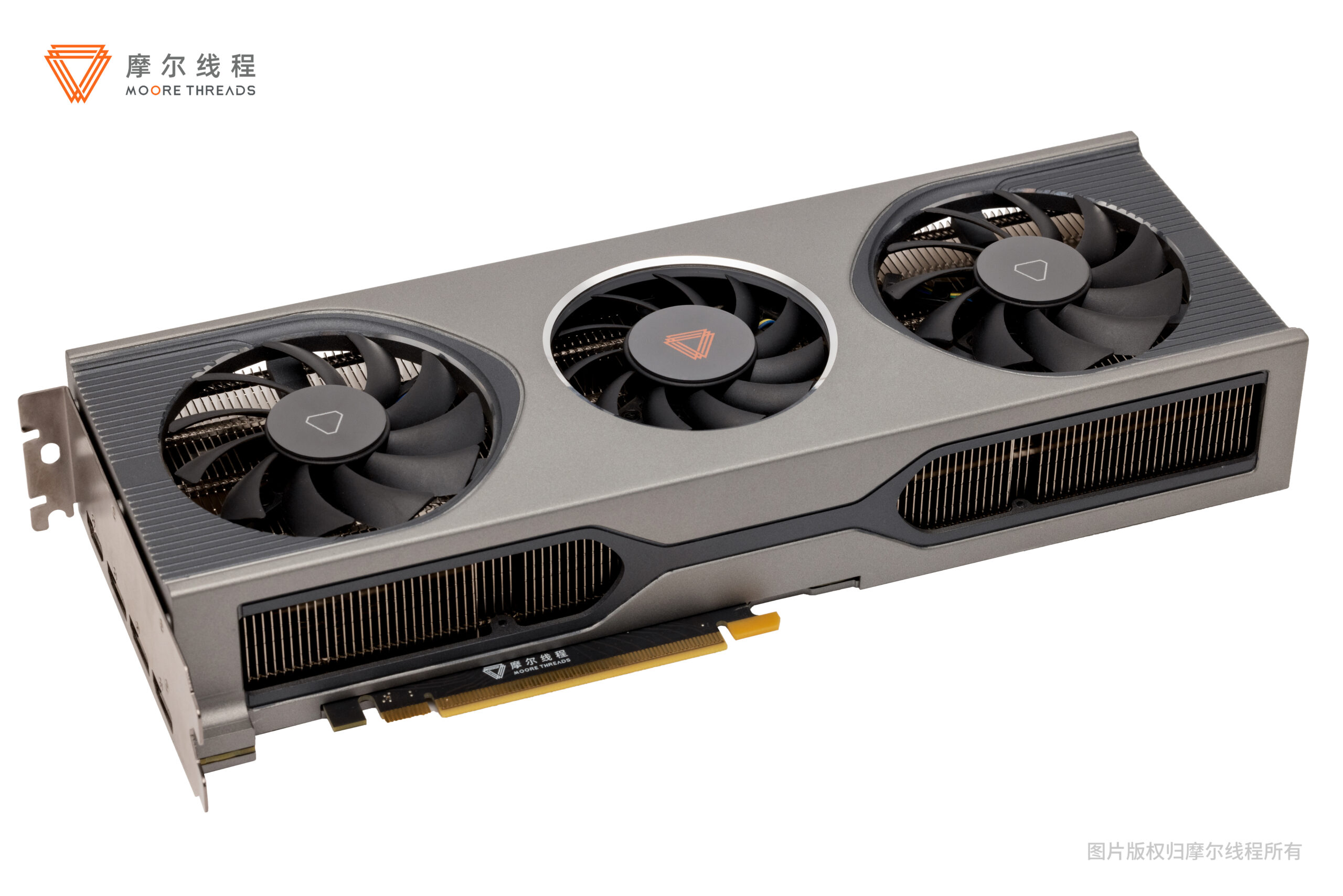 MTT S80 is the first domestic graphics card product to support the Windows environment and the DirectX graphics interface, as well as mainstream graphics interfaces such as Vulkan, OpenGL, and OpenGL ES. This means that the MTT S80 can meet the player group’s game requirements. The Windows driver of MTT S80 has built-in MUSA DirectX Driver module, and has completed the adaptation of dozens of mainstream games such as “Diablo 3,” “League of Legends,” and “Cross Fire” based on driver research.

Moore Threads demonstrated the smooth game running effect brought by MTT S80 on the real machine during the press conference. In order to provide better game engines and game products, Moore Threads is currently working closely with game engine developers such as Unreal and Unity, as well as top domestic game developers such as Tencent Games, NetEase Games, Xishanju, Perfect World, and 360 Games. Players can obtain a constantly updated 3A-level gaming experience with faster support. Moore Threads will continue to update the Windows driver and MUSA DirectX version in the future to achieve greater game compatibility and performance optimization.

PCIe 5.0 interface: The MTT S80 is the industry’s first graphics card equipped with a PCIe Gen5 interface, allowing for backward compatibility; the graphics card interface specification is PCIe 5.0 x16, with bidirectional 128GB/s data transmission capability. The increased bandwidth provided by PCIe 5.0 eliminates the communication bottleneck between the GPU and the system even further. In practice, the PCIe 5.0 x16 bus can significantly reduce the loading time of vertices, materials, and other data required for GPU operations, as well as the occurrence of stuttering, resulting in a better experience for applications such as games. 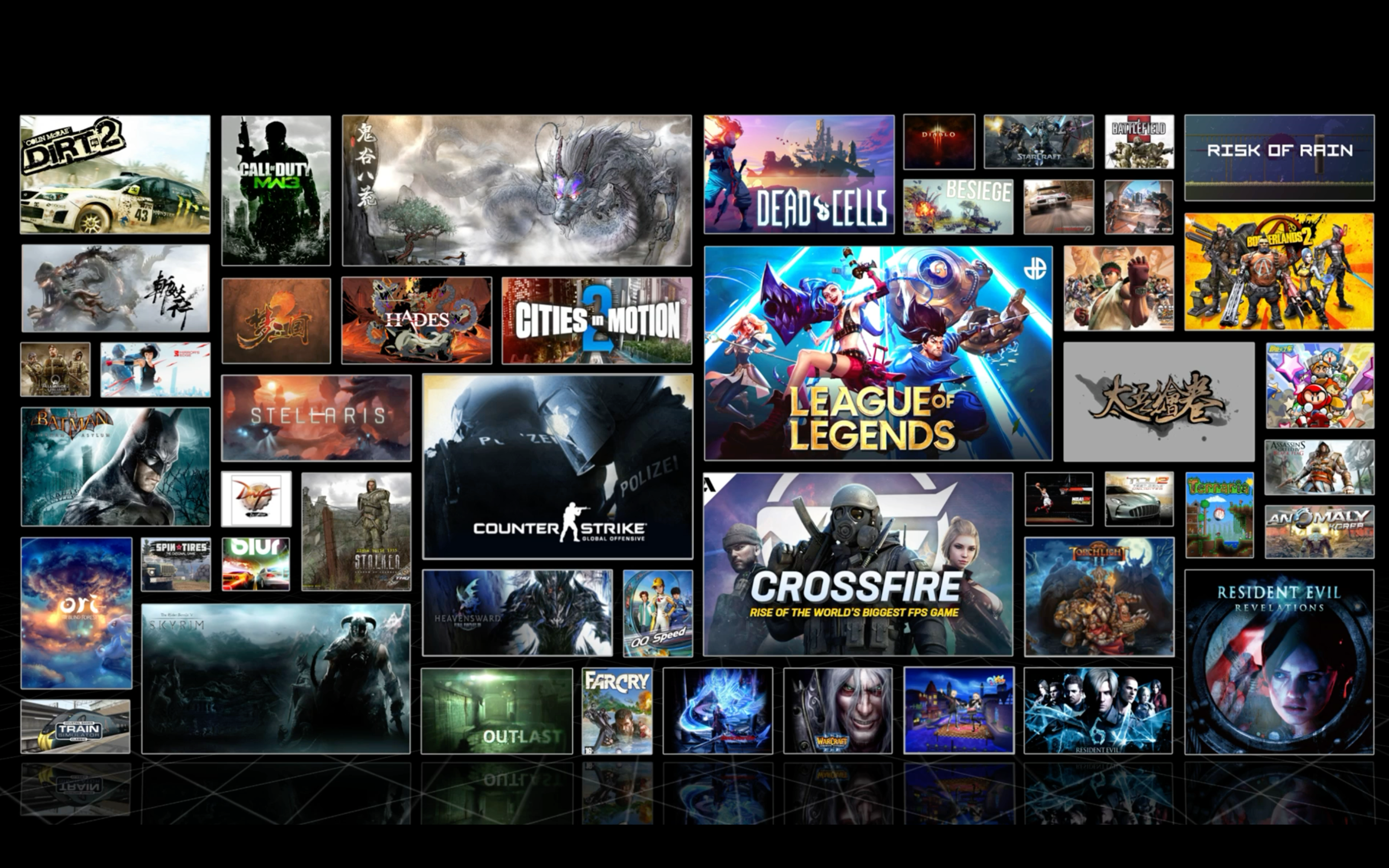 As we all know, developing and designing game graphics cards is extremely difficult, and the most difficult part is developing Windows drivers. Because of the high level of professionalism in computer graphics, the code volume of a mature set of graphics drivers is equivalent to that of an operating system, and talents who know how to develop Windows drivers are also in short supply. The biggest challenge that all GPU companies will face is how startups can develop excellent Windows drivers and perfectly support different versions of DirectX in a short period of time.

Moore Threads DirectX Alpha version driver based on the MUSA architecture was able to enable its multi-functional GPU to smoothly support “League of Legends” at the spring conference in March. Moore Threads innovation momentum was maintained as a result of this innovation. The MTT S80 could be displayed. “The ultimate goal of Moore Threads is to complete the development of DirectX’s complete functions and allow it to support current mainstream games and a huge game library,” said Zhang Jianzhong, CEO of Moore Threads, at the press conference.

At the moment, every player wishes to play faster and more games, which necessitates continuous improvement in game adaptation and game performance. Optimizing game performance typically necessitates consideration of multiple dimensions such as hardware, computing, memory access, scheduling, and system, which is inextricably linked to the investment of R&D resources and time. The performance of the driver software can be greatly improved through optimization, but this does not happen overnight. Simultaneously, more game engines must be supported, as well as extensive collaboration with a diverse range of game developers, which requires significant time and resource investment.

The GPU software ecology is a more difficult task than product development, and it is a long-term project. Moore Threads has taken a solid step forward as a new player in the field of game graphics cards, beginning with the MTT S80. Moore Threads hopes to continue climbing the graphics mountain with all game lovers and users through perseverance and perseverance.

Moore Threads is a high-tech integrated circuit company that specializes in GPU chip design. Its primary focus is the development and design of full-featured GPU chips and related products that can provide powerful computing acceleration capabilities to Chinese technology partners. Founded in October 2020, the company is dedicated to developing a new generation of GPUs for meta-computing applications, constructing a comprehensive computing platform that integrates visual computing, 3D graphics computing, scientific computing, and artificial intelligence computing, and establishing an ecosystem based on cloud-native GPU computing to help drive the digital economy’s development.

Moore Threads is distributed by Unixcloud Technology (Shenzhen) Co., Ltd. Unixcloud has a long history of product development and manufacturing. Moore Threads’ official authorized distributor is UnixCloud. It focuses on the field of edge computing in response to the computing power requirements of artificial intelligence development, and it offers the industry edge computing products and solutions that meet a variety of AI requirements. UnixCloud launched the 10G network card business at the same time, offering four-port and two-port 10G optical fiber network cards based on the Mucse-based network controller N10. Moore Threads has joined forces with Weiling Times and Silicon Continental to accelerate the adoption of PC cloud games. Moore Threads and Flying Paddle have passed level I compatibility testing, and software and hardware synergy is speeding up AI application innovation. Moore Threads and OpenMMLab have formed a strategic partnership to promote the collaborative development of algorithm frameworks and GPUs, as well as to jointly build a prosperous ecosystem of AI developers.